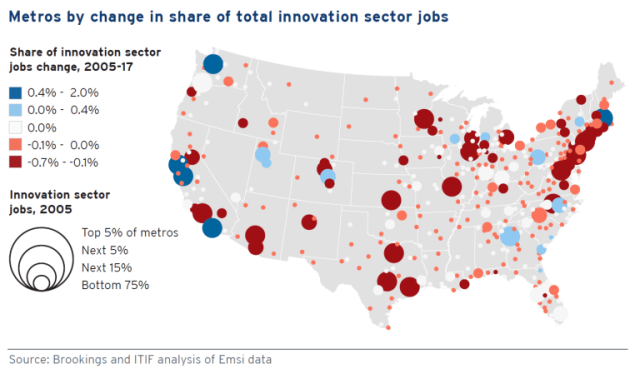 High-tech innovation has been a powerful driver of the U.S. economy – and as such can take full credit for the country’s prosperity since World War II. Yet, as a recent report by the Brookings Institution suggests, it has also led to what the report calls a “crisis of regional imbalance.”

The report draws attention to the fact that five top innovation metro areas – Boston, San Francisco, San Jose, Seattle, and San Diego – accounted for more than 90% of the nation’s innovation-sector growth between 2005 and 2017.

Over the same period, these metro areas increased their share of the U.S. total innovation employment from 18% to 23% – all at the expense of the bottom 90% of metro areas. As a result, fully one-third of the nation’s high-paying innovation jobs now reside in just 16 counties (and more than half in 41 counties), mostly on the West Coast and in Northeast.

Such an excessive concentration of tech (and wealth) has serious negative consequences. If for superstar hubs, that would “only” mean skyrocketing home prices and traffic gridlock, for the areas at the bottom, the situation is much worse. Deprived of the top tech talent and investment, whole portions of the country are falling into traps of perennial technological and economic underdevelopment.

The report argues that markets alone won’t solve the problem and that a new nation-wide program is needed. More specifically, the report proposes creating eight to 10 new regional “growth centers” across the heartland to catalyze innovation-driven economic development in these areas.

The report estimates that the cost of such a program for the federal government would be on the order of $100 billion over 10 years. (For comparison, this is less than the cost of U.S. fossil fuel subsidies).

A recent report by the Council on Foreign Relations, a think tank specializing in U.S. foreign policy and international affairs, highlighted the crucial role innovation plays for the American national security (I wrote about it here). Like the Brookings’ report, the CFR report calls for a national security innovation strategy to ensure the U.S. leadership in foundational and emerging technologies over the next 20 years.

Eugene Ivanov is the Founder of (WoC)2, an innovation consultancy that helps organizations extract maximum value from the wisdom of crowds by coordinated use of internal and external crowdsourcing.
View all posts by Eugene Ivanov →
This entry was posted in Global Innovation and tagged 2016 presidential election, Brookings Institution, Council on Foreign Relations, inequality, Innovation, regional imbalance. Bookmark the permalink.