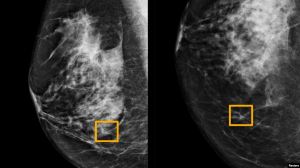 Good news from the front lines of the War on Cancer. The American Cancer Society reported the sharpest drop in cancer death rates in the United States between 2016 and 2017. The 2.2% drop, the biggest single-year drop on record, seems to be driven by accelerating declines in mortality from lung cancer, the leading cause of cancer death in the U.S.

The decline is attributed to two major causes: reduction in smoking, the biggest risk factor for lung cancer, and the development of new cancer treatments.

The ACS report also touches upon one of the bumpiest corners of the cancer field: cancer screening. Many diagnostic tests do identify cancers early when treatment is usually more effective. But they also identify growths that would never turn deadly – a phenomenon called “overdiagnosis.”

Many experts hope that further improvements in the efficiency of cancer screening can be achieved using advances in Artificial Intelligence. Two recent studies lend credit to this hope.

In the first study, a joint team of British and U.S. researchers trained an AI system to identify breast cancers using a set of ~29,000 mammograms. The authors of the study then showed that AI was able to identify cancers at least with a similar level of accuracy – and even higher in a separate experiment – as expert radiologists. Moreover, using the AI system allowed to reduce, by a few percent, the number of false-positive and false-negative results.

In the second study, conducted by a diversified team of U.S. scientists and clinicians, an AI system was fed with 2.5 million labeled samples of brain cancer biopsies and taught to identify 13 different types of brain cancer. In a side-by-side comparison, the AI system needed less than 150 seconds to make a diagnosis (as compared to about 30 minutes for a neuropathologist), with the accuracy being at least equal to that of a human tester (94.6% and 93.9%, respectively). Interestingly, the human testers were able to correctly identify samples AI could not and, vice versa, AI was able to identify samples the human testers diagnosed incorrectly.

Both studies imply that combining human testing with AI-assisted one can dramatically speed up the process of cancer screening while at the very minimum preserving the accuracy of testing.

Do we have bad news? Yes, we do. It will take years until the AI diagnostic systems become a mainstream of medical practice as large-scale clinical trials are required to get the green light from regulatory authorities.

Eugene Ivanov is the Founder of (WoC)2, an innovation consultancy that helps organizations extract maximum value from the wisdom of crowds by coordinated use of internal and external crowdsourcing.
View all posts by Eugene Ivanov →
This entry was posted in AI, Health Care, Innovation and tagged AI, breast cancer, cancer, Innovation, lung cancer, War on Cancer. Bookmark the permalink.