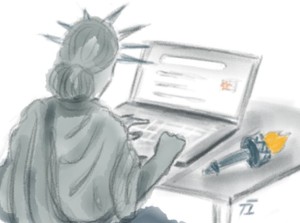 Social media were once considered a liberating technology, a level playing field allowing civil groups and ordinary citizens to reach large audiences at little or no cost. Unfortunately, the open and almost unregulated space of social media platforms has been hijacked by repressive regimes and politicians with authoritarian ambitions, who started to use them as instruments for political distortion and societal control, as tools for surveillance, oppression, and electoral manipulation.

As a result, social media are in crisis. This is a sentiment expressed in a recent report, “Freedom on the Net 2019,” prepared by Freedom House, a non-governmental organization promoting democracy, political freedom, and human rights around the world. The report assessed internet freedom in 65 countries, covering 87 percent of the world’s internet users, and concluded that global internet freedom declined for the ninth consecutive year in 2019.

A few numbers from the report are worth repeating here. Of 3.8 billion people with access to the internet:

Among the countries in the Free category, I immediately spotted Iceland, Canada, and France, three established, mature democracies. On the opposite side of the spectrum, in the Not Free category, my eye caught the names of China, Russia, and Iran, all known for their repressive and authoritarian nature. Is there a correlation between having internet freedom and being a free country?

To see whether my observation had any statistical basis, I ran a linear regression test plotting the internet freedom rankings (Y-axis) against Freedom Rating provided by the same Freedom House (X-axis). The Freedom Rating ranks a country’s political rights and civil liberties on the scale 1.0 to 7.0, marking countries as politically Free (1.0 to 2.5), Partly Free (3.0 to 5.0), or Not Free (5.5 to 7.0). The results of the test shown below clearly point to a strong correlation between the two indexes:

There is one potential problem with the above test. One might argue that the observed correlation is exaggerated because both sets of scores are provided by the same source, so that Freedom House gives higher internet freedom scores to the countries it considers more democratic, resulting in a bias.

To exclude such a bias, I repeated the test using as X-axis input the political freedom rankings taken from the Democracy Index 2019 composed by the Economist Intelligence Unit. In the latter case, the countries are ranked on the scale 0 to 10.0, marking them as authoritarian regimes (0–4.0), hybrid regimes (4.0–6.0), flawed democracies (6.0–8.0), and full democracies (8.0–10.0).

The resulting plot is shown below (please note that the inverted slope of the curve is because the Economist Intelligence Unit ranks political freedom in ascending order while Freedom House in descending):

A strong correlation between the two indexes was evident again leading to the conclusion that the more democratic a country is, the more internet freedom it provides to its citizens.

This is a hardly surprising discovery because it only confirms what we’ve intuitively known for a long time.

Want a free internet? Live in a free country!

Eugene Ivanov is the Founder of (WoC)2, an innovation consultancy that helps organizations extract maximum value from the wisdom of crowds by coordinated use of internal and external crowdsourcing.
View all posts by Eugene Ivanov →
This entry was posted in Internet and tagged Democracy Index 2019, Economist Intelligence Unit, Freedom House, Freedom on the Net 2019, Freedom Rating, Internet, Online Harassment, Social Media. Bookmark the permalink.