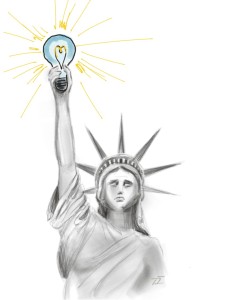 With waves of profound technological change rocking every corner of the global economy, innovation isn’t a luxury anymore, not even a matter of choice – it’s a means of survival.  The mantra “innovate or die” may have become a cliché, yet it correctly reflects the contemporary business environment in which companies must relentlessly innovate to just stay in business.

Unfortunately, managing the innovation process in a sustainable way turned out to be difficult for a lot of organizations. Many corporate innovation leaders have failed to establish the infrastructure and processes needed to run efficient innovation programs and instead are wasting time talking about the elusive “culture of innovation.”

Sure, it’s impossible to ignore the importance of the human component in any corporate process, including innovation. But it’s much more important to identify specific factors affecting the innovation process to be able to improve it in a systematic way.

One such factor that, quite surprisingly, doesn’t get much attention is freedom. Yes, freedom. It’s very simple: in order to innovate, one needs freedom – and this applies to innovation at the individual, organizational, and national levels.

Freedom from being discriminated

A case in point is the effect on innovation of U.S. anti-discrimination laws. A 2016 study showed that U.S. state-level employment nondiscrimination acts (ENDAs)—laws that prohibit discrimination based on sexual orientation and gender identity—spur innovation. U.S. public companies headquartered in states that have passed ENDAs experienced an 8% increase in the number of patents (and an 11% increase in their quality) relative to companies headquartered in states that have no ENDAs.

No, I’m not saying that sexual minorities or people smoking weed are intrinsically more innovative. My point is that innovation implies a certain level of individual freedoms, including freedom from being discriminated for whatever reason.

The labor laws of innovation

Interestingly, labor laws have also been shown to have a positive effect on innovation. For example, the staggered passage of wrongful discharge laws (WDL) (the laws providing employees with greater protection than employment-at-will) across the U.S. states created a “natural experiment” assessing their impact on the innovation output. And this impact turned out to be quite impressive: the adoption of WDL resulted in a rise in the annual number and quality of patents issued to a state, an effect starting to emerge two years after the WDL passage in this state.

The above data indicate that innovation is fostered by limiting firms’ ability to discharge their employees at will.  The authors of the study call this phenomenon an “insurance effect”: feeling increased protection from negative consequences of failure, employees are more committed to the engagement in risky innovative projects. In other words, providing employees with immunity for failed innovation projects might be a better way to promote innovation than by “celebrating failures.”

There is one more level at which innovation can be affected and which is almost never considered in the literature: the level of political and individual freedoms in individual countries. I first came across this point back in 2014 while reviewing the 2013 Global Innovation Index, a collaborative project of Cornell University, INSEAD, and the World Intellectual Property Organization. The Index ranked the innovation capabilities of 142 countries by using 84 indicators, which included, among others, the quality of higher education, availability of venture capital and government support.

Even a brief look at the Index led me to a curious observation: the top of the ranking was heavily populated by countries representing established democracies (according to the 2013 Freedom of the World Report). The reverse was also true: the bottom of the Index was stacked with countries with an extremely low level of democratic development.

To give this observation statistical support, I used the data from the 12th (2019) edition of the Global Innovation Index that analyzes global innovation performance of approximately 130 economies (Y-axis) and plotted it against the political freedom rankings taken from the Democracy Index 2019 composed by the Economist Intelligence Unit (X-axis). In the latter case, the countries are measured on the scale 0 to 10.0, marking them as authoritarian regimes (0–4.0), hybrid regimes (4.0–6.0), flawed democracies (6.0–8.0), and full democracies (8.0–10.0). The results of the regression analysis are presented below:

A reasonably strong correlation does exist indicating that the ability of a country to innovate correlates with the level of political freedom in this country.

A careful examination of the graph reveals, however, a certain degree of “non-linearity,” implying other factors affecting the innovation index. I’ll delve into this issue in follow-up posts.

But for now, let’s just state aloud what we always intuitively knew: to be more innovative, you should live in a free country.

4 Responses to Innovation and Freedom