Innovation: The Role of Money and Government

Over the past couple of months, I have attempted to assess the role of a few major socio-economic factors on the national innovation potential. To do that, I ran a series of simple regression tests to estimate the correlation between these factors (as measured by appropriate indexes) and the 2019 Global Innovation Index, a database that analyzes global innovation performance of approximately 130 economies.

First, I analyzed to which extent the ability of a country to innovate correlates with the level of political freedoms. Second, I looked at a possible role of the country’s prosperity and education spending.

The above findings can be summarized as follows: 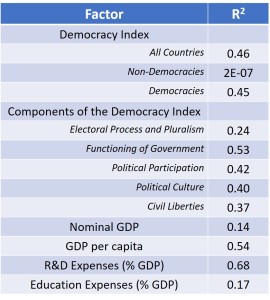 A more sophisticated statistical analysis is needed to see whether this argument is valid or not.

Eugene Ivanov is the Founder of (WoC)2, an innovation consultancy that helps organizations extract maximum value from the wisdom of crowds by coordinated use of internal and external crowdsourcing.
View all posts by Eugene Ivanov →
This entry was posted in Global Innovation, Innovation and tagged 2019 Global Innovation Index, Democracy, Freedom, GDP, GDP per capita, Innovation, R&D, The Democracy Index 2019, The Economist, The World Bank. Bookmark the permalink.

1 Response to Innovation: The Role of Money and Government