In my previous post, I further explored the notion that the ability of a country to innovate correlates with the level of political freedoms in this country.

In particular, I showed that no such correlation exists for non-democratic countries (as defined by the Democracy Index 2019 composed by the Economist Intelligence Unit). It appears that a “threshold” exists below which no improvements in democratic development would lead to more innovative economies.

In contrast, a reasonably strong correlation was observed for democratic countries (with a plateau seen for the most democratic). Further analysis suggested an important role of government in promoting national innovation programs.

Before exploring this “government” connection in more detail, I wanted to check other, seemingly more trivial, factors that could affect a country’s ability to innovate.

One of such factors is money. Innovation costs money, so more prosperous countries should theoretically be more innovative. To test this simple idea, I plotted the countries’ innovation rankings from the 12th (2019) edition of the Global Innovation Index against their nominal GDP (as per World Bank, 2018). Poor correlation was observed (R2=0.14).

This correlation was evident, however, when instead of nominal GDP, GDP per capita, which is considered a bona fide measure of a country’s prosperity, was used. The results are presented below: 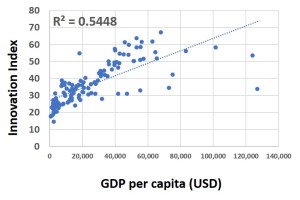 One can see that the correlation between a country’s Innovation Index and GDP per capita is especially strong up to approximately $60,000; a plateau seems to be formed after that. There are also two outliers with the GDP per capita exceeding $120,000: Luxemburg ($123,892) and Qatar ($126,898). With these two countries excluded, the correlation becomes even stronger (R2=0.68).

Perhaps, the best way to see how money affects innovation at the country level is to look at how much this country spends on Research and Development (R&D). To do that, I plotted the Innovation index against the national R&D spending expressed as the percentage of the nation’s GDP (as per World Bank). The results of this comparison are presented below:

A solid correlation is indeed seen. This correlation seems to be especially strong until R&D spending does not exceed 2% of the country’s GDP; a plateau seems to be forming after that – which intuitively makes sense.

Finally, I decided to see how the country’s expenses on education may affect its innovation abilities. To do that, I plotted the Innovation Index against the country’s educational expenses expressed as the percentage of the nation’s GDP (as per World Bank). Somewhat surprisingly, a poor correlation between the two parameters was observed: 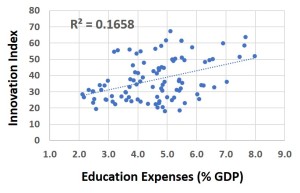 There is a problem with the education expenses data that I used: many data points are not current, so data for different years were often used to compare countries (although I didn’t use the data points collected prior to 2014). I do not know to which extent this may or may not affect the quality of the comparison.

Regardless, the lack of a strong correlation between the country’s Innovation Index and its spending on education looks surprising. Whether it reflects the fact the relationship between education spending and its quality is complex – or that some additional, more subtle factors play a role in innovation – needs further investigation.

Eugene Ivanov is the Founder of (WoC)2, an innovation consultancy that helps organizations extract maximum value from the wisdom of crowds by coordinated use of internal and external crowdsourcing.
View all posts by Eugene Ivanov →
This entry was posted in Global Innovation, Innovation and tagged 2019 Global Innovation Index, Democracy, Freedom, GDP, GDP per capita, Innovation, R&D, The Democracy Index 2019, The Economist, The World Bank. Bookmark the permalink.

2 Responses to Innovation and Money