In a recent post, I presented evidence that the ability of a country to innovate correlates with the level of political freedoms in this country.

To make this argument, I used innovation rankings from the 12th (2019) edition of the Global Innovation Index that analyzes global innovation performance of approximately 130 economies (Y-axis) and plotted it against the political freedom rankings taken from the Democracy Index 2019 composed by the Economist Intelligence Unit (X-axis). The results are presented below:

As one can see, a reasonably strong correlation exists between the countries’ innovation prowess and the level of democratic development.

A careful examination of the graph reveals, however, a certain degree of “non-linearity,” implying that the relationship between innovation and freedom might be different at the lower and higher ends of the freedom scale (X-axis). I decided to explore this opportunity.

The Democracy Index 2019 assesses the countries’ level of democratic development on the scale 0 to 10.0, marking them as authoritarian regimes (0–4.0), hybrid regimes (4.0–6.0), flawed democracies (6.0–8.0), and full democracies (8.0–10.0). I pooled the data for authoritarian and hybrid regimes to mark them “Non-Democracies” (0-6.0) and the data for flawed and full democracies to mark them “Democracies” (6.0-10.0) and plotted them separately. The results can be seen below: 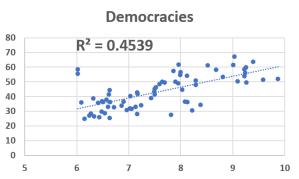 Outliers occur on both graphs. For the non-democratic countries, the most visible is China (democratic index 2.26, innovation index 54.82). Among democracies, these are Hong Kong (6.02; 55.54) and Singapore (6.02; 58.37); excluding Hong Kong and Singapore from the “democracies” graph makes the correlation even stronger (R2=0.59). The presence of outliers suggests that even countries with a less than stellar level of political freedoms can be innovative – apparently by inventing some “compensation” mechanisms. I will study such “compensation” mechanisms in the future.

I must admit that the above results came to me as a surprise. First, I didn’t expect that there appears to be a “threshold” in democratic development below which no improvements would lead to more innovation; I expected at least some level of positive correlation at the lower end of the political freedom spectrum to exist.

Nor did I expect that there will be no “plateau” in democratic development. I thought that when a country reaches a certain level of political freedom, any further improvement will not affect innovation, the level of which will be defined by other factors: investments, education, etc. Instead, what the data suggests is that at all levels of democratic development, there are factors included in The Economist’s Democratic Index that still positively affect innovation.

What these factors could be? To probe this question, I plotted the innovation index against each of the five individual components included in the Democracy Index: Electoral Process and Pluralism, Functioning of Government, Political Participation, Democratic Political Culture, and Civil Liberties. The results of this analysis are presented in the table below: 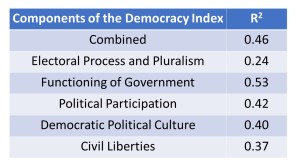 Although all five individual components positively correlate with innovation, the strongest correlation occurs for Functioning of Government (R2=0.53).

I will return to factors affecting Innovation Index in my future posts, but for now, we can leave the topic with the following statement: when it comes to innovation, functioning governments matter.