A map of open innovation practices 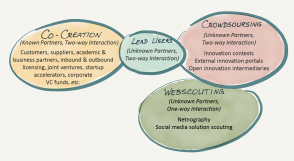 A problem that I see with the current literature on open innovation is that while focusing predominantly on theoretical aspects of the concept (value proposition, strategic alignments, governance and management, human capital and culture), it pays little attention to the description of specific open innovation practices. As far as I know, a 2013 study by Henry Chesbrough and Sabine Brunswicker remains the only recent publication presenting a systematic list of open innovation practices used by American and European companies. (I’d be very grateful to anyone pointing me to the additional existing data on the topic.)

Earlier, I presented my own “map” of the existing open innovation practices. In contrast to Chesbrough and Brunswicker, who classified them based on the knowledge flow direction (inbound vs. outbound) and knowledge flow financial nature (pecuniary vs. non-pecuniary), I built my classification around the identity of the open innovation partner(s).

This distinction sets apart two major groups of open innovation practices: co-creation and crowdsourcing. When firms collaborate (co-create) with their customers, suppliers, academic and business partners or engage startups via innovation ecosystems, they deal with defined partners, the partners whose identity is known to them. In contrast, crowdsourcing involves undefined partners, the members of a crowd whose identity is unknown to the firm, at least initially. The major specific crowdsourcing practices include innovation contents, external innovation portals and the use of open innovation intermediaries.

The presence of a large number of partners – and the need to ensure that they all act independently of each other to make crowdsourcing campaigns effective – dictates the use of online methods of aggregating the incoming knowledge. At the same time, co-creation still largely relies on the face-to-face interaction.

Now, I’d like to add two more elements to my “map.” First, I believe that a better place for lead users (previously placed in the co-creation basket) would be at the intersection between co-creation and crowdsourcing. On the one hand, engaging lead users represents co-creation in its classic form. On the other, the large number of engaged lead users justifies the employment of online tools of knowledge gathering (like in case of crowdsourcing), rather than face-to-face interactions. The Audi Virtual Lab – a project that involved 7,000+ customers in the co-development of the Audi in-car multimedia system – is a great example of an advanced lead user application.

Second, I propose adding the third group of open innovation practices: webscouting. One specific practice in this basket is netnography (a combination of “internet” and “ethnography”): collecting insight (needs and wants) of social-media-active consumers by following their conversations on various online forums. The other is the social media solution scouting, a practice very similar to – and in some cases even overlapping with – netnography: searching online venues for already existing (i.e. generated by consumers) solutions to the firm’s problems. (Here, I leave aside potential ethical issues and IP complications that could result from such a mode of information gathering.)

What unites webscouting with crowdsourcing is that both deal with unknown, undefined open innovation partners. What sets webscouting apart from both crowdsourcing and co-creation is the one-way (passive) mode of interaction between the partners: collecting knowledge from the customers without providing them with feedback. In contrast, crowdsourcing and co-creation both imply the two-way mode of interaction between the partners, either online or in person.

(I want to thank Kevin McFarthing for his suggestion to add inbound and outbound licensing to the co-creation basket).

5 Responses to A map of open innovation practices