The Role of Diversity in Innovation 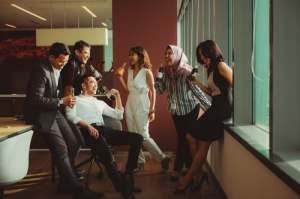 Can labor laws affect innovation? To many people, this question may sound nonsensical. Why would such a boring thing like labor law have anything to do with an exciting act of creating something new?

Don’t rush to the conclusion. Have you heard about so-called employment nondiscrimination acts (ENDAs)? These areU.S. state-level laws that prohibit discrimination based on sexual and gender identity. A 2016 study showed that ENDAs spurred innovation. The authors of the study found a significant increase in the number and quality of patents at firms headquartered in U.S. states that have passed ENDAs relative to firms headquartered in states that have not. This result was more pronounced for firms in states with a large homosexual population and for firms in human capital-intensive industries, such as technology and finance.

As far as I know, there are no studies suggesting that sexual minorities are intrinsically more innovative. What the above study implies is that innovation requires a certain level of individual freedoms, including freedom from being discriminated against for whatever reason. It also points to an important positive factor affecting innovation: diversity and inclusion in the workplace.

A growing body of evidence indicates that heterogeneous firms perform better than their homogenous counterparts. Research by Deloitte shows that organizations with inclusive cultures are six times more innovative and agile, eight times as likely to achieve better business results, and twice as likely to meet or exceed financial targets than organizations with less diversity in the workplace. Another study reported that more diverse companies were 45% more likely to report annual market-share growth and 70% more likely to enter a new market.

Analysis performed by McKinsey shows that the benefits of diversity in the workplace originate at the very top of the corporate world. McKinsey analyzed the composition of executive teams in more than 1,000 firms across 12 countries and found that those in the top quartile for ethnic and cultural diversity were 33% more likely to outperform those in the bottom quartile. The analysis also showed that firms in the top quartile for gender diversity were 21% more profitable than firms in the bottom one.

Diversity among members of the boards of public companies matters, too: Credit Suisse Research Institute found that firms with one or more woman board members had higher average ROI and better average growth than firms with male-only boards. And yet, 77% of S&P 500 company boards are more than two-thirds male, and only 2%(!) have more than 50 percent women members.

Why is diversity important? The answer to this question appears quite straightforward: diverse and inclusive companies innovate better. The connection between diversity and innovation was proven by a substantial body of research.

For example, Boston Consulting Group (BCG) surveyed the innovative potential of 1,700 American firms of different sizes and locations. As the indicator of innovation, BCG looked at the portion of a firm’s revenue from products and services launched within the last three years. BCG found that firms with above-average diversity produced a greater proportion of revenue from innovation (45% in total) than firms with below-average diversity (26%). Not surprisingly, this 19% innovation-related advantage had translated into better overall financial performance.

One specific factor identified by researchers of the role of diversity in innovation was the composition of innovation teams. According to a 2013 report by the Center of Talent Innovation, if a member of the innovation team shares an ethnicity with a client, the team is 150% more likely to understand the client’s needs, a scenario that can make the difference between winning and losing new business. That means that with increased diversity within a firm, its opportunity to acquire new clients and expand into new markets increases, too.

The above study may point to a useful approach for organizations seeking to enter a new market or a new segment of an existing market: to create a market research/innovation team with a demographic composition closely resembling the one of the target client population.

Why Diverse Teams Are More Innovative?

Diversity in the workplace can take multiple forms. Some of them are called inherent (inborn) traits: age, gender, race and ethnicity, and sexual orientation. Others fall in a category of acquired traits: education, professional and personal experiences, veteran and disability status. Recently, a lot of attention has been drawn to cognitive diversity: bringing together people with different styles of thinking and different viewpoints. Adding the component of cognitive diversity to a more traditional “mix” of inherent and acquired diversity can bring organizations to a new level of innovation power.

An important question to answer is, what are specific mechanisms by which diversity may affect innovation? A 2014 article in Scientific American, “How Diversity Makes Us Smarter,” by Katherine W. Phillips began unraveling this fundamental issue.

It’s reasonably easy to understand how the diversity of expertise and experience would spur innovation. After all, in today’s business environment, meaningful innovations happen at cross-borders of different disciplines. Having teams composed of experts in several relevant fields becomes a key prerequisite for any successful innovation project, be it a new car or a new way to save money.

But why is the diversity of race, ethnicity, gender, and sexual orientation equally important? Because people who are different from one another in the race and gender dimensions bring to the table unique information and experiences. This diversity of information creates a positive tension within the group and that tension increases creativity. Besides, simply interacting with individuals who are different forces group members to reassess their own assumptions, question others, and prepare better.

Of course, working in diverse groups isn’t easy. It requires individuals to adjust their own behavior and working styles, something that many of us may find uncomfortable. But a better innovation product will eventually emerge from this hard work. And, by the way, who said that innovation was easy?

Crowdsourcing as a “proxy” for diversity and inclusion in the workplace?

Building diverse and inclusive organizations takes time. However, there is a technique to approach large and diverse groups of people right away: crowdsourcing. Crowds assembled by established open innovation platforms, such as HeroX, represent people of different ages, educational and professional backgrounds, locations, and cultures. Crowds are as diverse a workforce as one could only dream of having in any organization – and they show the value of diversity and inclusion day in and day out by providing superior solutions to the world’s most pressing problems.

I’m grateful to Ralph-Christian Ohr for pointing to his 2013 post “Innovation and Diversity.”